Chris Ferrara says the telephone call from the management at the Intercontinental Terminals came as no surprise. At that point their terminal in Deer Park, Texas, had been ablaze nearly 36 hours.

“They had the opportunity to call a lot of different people and they chose us,” Ferrara said. “With our reputation and the products we manufacture, they had faith that we could put the fire out.”

Ferrara, owner of US Fire Pump in Holden, LA, took a break from a full week of post-extinguishment vapor suppression at ITC to attend his company’s Firefighting Foam Seminar in Beaumont, TX. Following a live-fire product demonstration at the Industrial Rescue Fire Training Field Ferrara made time to discuss the Deer Park extinguishment.

In the last year, US Fire Pump has extended its firefighting interests from manufacturing large-volume pumps and monitors to responding to industrial emergencies to use that equipment, Ferrara said.

“We have fought fire at industrial complexes all over Louisiana,” he said. “We were contracted by the state to put out a 20-acre landfill fire that no one else could put out. We’ve been on a multitude of responses that a lot of people didn’t hear about.”

Technicians and career firefighters employed by US Fire Pump’s manufacturing operation make up a core group that respond to incidents such as the ITC fire, Ferrara said.

“I’ve been part of the fire service for nearly 40 years,” he said. “I started as a volunteer firefighter. I was at the Christmas Eve 1989 Exxon refinery fire in Baton Rouge with Dwight Williams.”

Many of those years were spent as the owner of fire truck maker Ferrara Fire Apparatus, also in Holden. Developing a keen interest in moving big water was part of the evolution going on throughout industrial firefighting, he said.

“We were the first to receive a Guinness Book of World Record listing for having the largest fire pump to be installed on a fire truck,” Ferrara said. “That idea took nearly three years to develop, start to finish. Our goal was to develop a fire pump that would pump in excess of 5,000 gpm.”

Eventually, he sold his apparatus company to open US Fire Pump, specializing in large-volume water delivery for industrial emergencies. Today, the company’s largest pump produces in excess of 6,000 gpm at 150 psi pressure from draft.

All of this brings us to the 10 p.m. telephone call on March 18 to Ferrara from Dwight Williams, expert in bulk flammable liquid firefighting, and ITC management. Once ITC signed a contract US Fire Pump began loading a carefully chosen assortment of trailer mounted monitors and pumps, large-diameter hose, proportioning systems and 15,000 gallons of 1 x 3 AR-AFFF Signature series foam.

A 16-truck convoy set out for Deer Park that night. However, as if the situation were not complicated enough, getting some of that equipment to the fire proved more difficult than expected.

“One of the drivers was running low on fuel so he decided to get off the interstate,” Ferrara said. “He got stopped by a Texas trooper because the lights were blinking on the trailer.”

Indifferent to the driver’s plea about the emergency in Deer Park, the lawman proceeded to write him up for numerous violations ranging from no mounting bracket for the fire extinguisher to no duplicate set of fuses for the vehicle. The delay amounted to several hours, Ferrara said.

“We intend to take it up with the judge,” Ferrara said.

The fire and smoke from Deer Park was visible for miles before the convoy arrived at 7 a.m. March 19, he said. Not that Ferrara had time to take in the view.

“Naturally, in route to the scene, we were looking at Google Maps and any other resource we could find to look for alternate water sources,” Ferrara said. “You really can’t rely on plant water or what is already in place.”

Water supply issues had already intensified problems at the fire scene. Due to the malfunction of two fireboat pumps drawing from the Houston Ship Channel, water pressure dropped significantly for nearly six hours the previous evening.

Unfortunately, what was in place with regard to big water when the US Fire Pump team arrived was inadequate for the job, Ferrara said.

“There were small five-inch lines in use,” he said. “There wasn’t enough in flow characteristics to put out a fire of that magnitude. So the top priority was to get water.”

After making an aerial survey of the fire ground via helicopter, Ferrara and his team placed a 3,000 gpm submersible pump in a dike flooded with water and foam. Firefighters also laid a mile of 12-inch hose to draw from submersible pumps in the ship channel. Using a booster pump, the water was directed to a 9,000 gpm monitor.

Also moved into position was a fire truck with a manifold capable of flowing 8,000 gpm from a front-mounted monitor and 5,000 gpm apiece from two rear-mounted monitors.

“It is basically a fixed system that you can mobilize around,” Ferrara said. “It even has a hose bed so you can lay 12-inch hose as you position the truck.”

Getting everything in place took time. Firefighting did not start in earnest until nearly 2 p.m. that afternoon, he said. Meanwhile, the fire continued to do its worst. The fire had “a lot of moving parts all going in different directions,” Ferrara said.

“Tanks were rupturing, blowing the lids,” Ferrera said. “The lids were fish mouthing, which is what we call it when the tanks open up. And they were blowing flames, sometimes 200 to 300 feet. We had lot of three-dimensional pressure fires, all throughout the piping rack. We had dike fires, too.”

Fortunately, application of the Signature Series foam had “a tremendous impact leading to a steady knockdown,” he said.

“We used most of what we had in the initial attack which made a big difference,” Ferrara said. “Then we continued using the other foam that ITC brought in.”

By 3 a.m. on March 20, the fire was completely extinguished. However, a small stockpile of Signature held in reserve proved invaluable. At about 12:15 p.m. on March 22, the secondary containment wall was breached, releasing foam and product into a ditch.

“It created a stream of fuel running down that ditch that reignited,” Ferrara said. “We had nearly 40 percent of the original fire come back.”

Using the Signature series foam, the firefighters extinguished the new fire in less than 45 minutes, he said.

“That was pretty remarkable just by itself,” Ferrara said.

Signature series is “C6” foam utilizing a hydrocarbon surfactant molecule with a perfluorinated tail of six carbon atoms. This means far less per- and polyfluoroalkyl substances (PFOS and PFOA) that are bioaccumulative, causing environmental concern.

Part of the idea behind Signature series foam, of which US Fire Pump is the distributor, is to use the C6 foam exclusively during extinguishment, then switch to a new non fluorinated product, Vapor Suppression Product (VSP), to maintain a foam blanket across the fuel surface. It is during this period that the bulk of firefighting foam has to be used.

Unfortunately, VSP, one of the products demonstrated in Beaumont, still weeks from hitting the market, was unavailable for use at Deer Park, Ferrara said. But the US Fire Pump team did apply its skill for innovation to minimize the vapor release after the fire.

“After the fire there was no way to move the product because all the valves were compromised,” Ferrara said. “All these tanks were open with product exposed. You can’t get in the dike because of all the mangled piping.”

US Fire Pump mounted a submersible pump to the end of a 175-foot articulated boom used to pour concrete.

“We laced the boom with hydraulic lines,” Ferrara said. “Then we back fed through the piping of the concrete truck and through a booster pump so that we were actually relaying product, draining it out of the tanks to move to a secure storage tank.”

The crew was also able to use the chemical resistant large-diameter hose as a means to move the product to a safe place, he said.

“This was a service that, in my opinion, no other firefighting company could provide to help mitigate the situation,” Ferrara said.

Credit for the successful extinguishment at Deer Park belongs to a lot of people, not just US Fire Pump, he said. Among others, Channel Industries Mutual Aid (CIMA), a non-profit organization combining the fire-fighting, rescue, hazardous material handling and emergency medical capabilities of the refining and petrochemical industry in the Houston area, held the fire in check for several days.

But in the future this will be remembered as a fire that Dwight Williams and US Fire Pump put out, Ferrara said.

“Dwight, at 72, is pretty amazing in that, like US Fire Pump, he still has the technical know-how to make these things happen.” 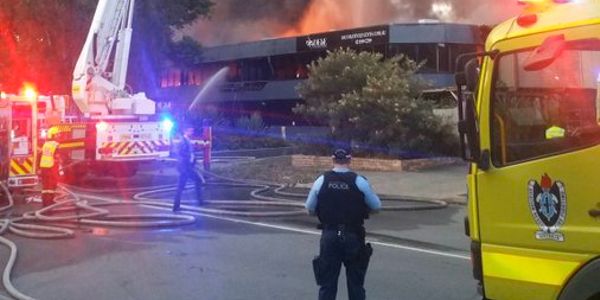 Heavy smoke threatens to obscure flight use at Sydney airport.

Power outages due to damaging storms were blamed for the "elevated flare" condition.

No specific information was released about the nature of the accident.

Civilians rush diesel to the scene during a factory fire in Karachi. 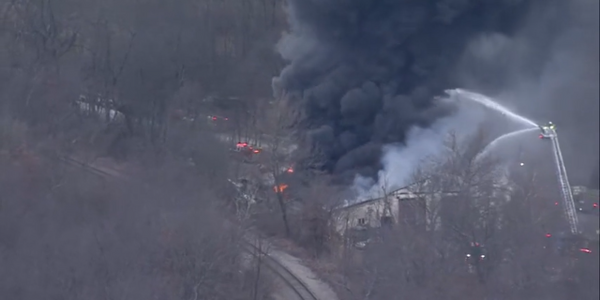 Lack of water at the fire scene hinders emergency operations.

Fire Breaks Out at Metals Factory in Germany 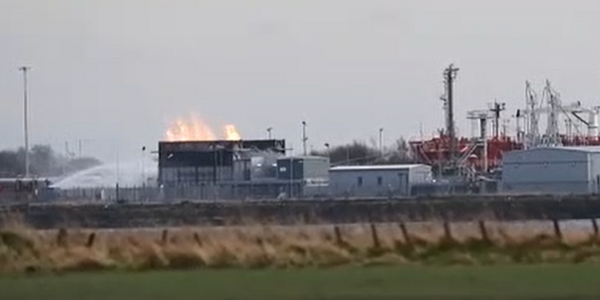 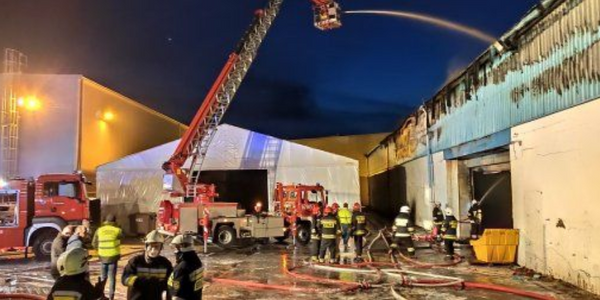 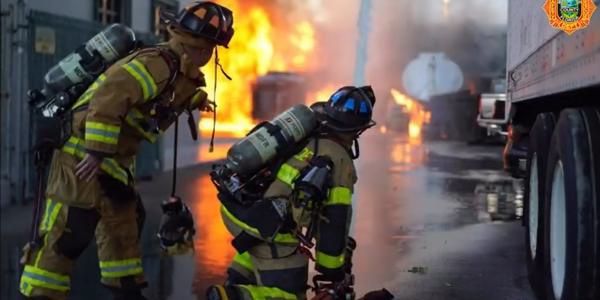 More than 30 fire units responded to the two-alarm blaze.