As if being a firefighter was not risky enough, a new five-year study of 30,000 firefighters conducted by the National Institute of Occupational Safety and Health indicates that firefighters suffer higher rates of several types of cancers, and of all cancers combined, than the U.S. population in general.

Unfortunately, that cancer risk follows firefighters back to the station with the fire truck. Several studies cited by the American Cancer Society have found that long-term, heavy exposure to diesel exhaust can cause lung cancer in lab animals.

“People are realizing that, definitely, diesel emissions are a big factor when it comes to cancer in the fire service,” said Scott Beecher, president of Ward Diesel Filter Systems.

Unlike some fire station filter systems that require attaching a hose hanging from the station ceiling to the fire truck tailpipe, No Smoke 2 is installed inline with the vehicle exhaust. A proprietary coating on the ceramic reacts with the exhaust, turning it into carbon dioxide and water vapor.

“It’s a catalyst that goes in the end of the tailpipe,” Beecher said. “It follows the after treatment device but comes before the diffuser tip.”

Diesel exhaust is made up of two main parts – gases and soot. The gas portion of diesel exhaust is mostly carbon dioxide, carbon monoxide, nitric oxide, nitrogen dioxide, sulfur oxides and hydrocarbons. The soot or particles consists of carbon, organic materials and traces of metallic compounds.

Health concerns about diesel exhaust relate not only to cancer, but lung and heart disease as well.

No Smoke 2 is specifically designed for use in diesel vehicles sold since 2007, Beecher said, regardless if the vehicle comes with its own selective catalytic reduction system as required by law since 2010.

SCR systems are designed for over-the-road commercial trucks to protect outdoor air quality, not fire apparatus that may operate inside confined spaces for extended periods of time, he said.

“That is specifically why we developed the No Smoke 2,” Beecher said. “It’s a filter that oxidizes the additional gases created by SCRs such as carbon monoxide and ammonia seepage.”

Whereas the catalyst in a SCR may take as much as 30 minutes to reach its operating temperature needed to oxidize emissions, No Smoke 2 uses a low temperature catalyst that begins oxidizing exhaust immediately, he said.

The first generation Ward Diesel exhaust device, the original No Smoke, required the fire truck operator to turn it on and off separate from the ignition. The vehicle mounted aspect of the No Smoke 2 takes the operation out of the hands of the firefighters, Beecher said.

“It’s always working no matter where it goes,” he said.

That can prove to be of benefit at the fire scene as well as the fire station, Beecher said.

“You may have multiple fire trucks operating for hours at a time,” Beecher said. “You’re exhausted. You take off your SCBA mask and inhale deeply. Imagine what you’re sucking into your lungs. That capacity to filter exhaust on-scene is definitely another advantage.”

The original No Smoke permitted replacement of a filter cartridge every two to four years. By comparison, No Smoke 2 requires exchanging the entire device to replenish the spent filter.

“We just swap it out,” Beecher said. “You send us the old one and we ship the replacement back. Other than that it’s zero maintenance.”

No Smoke 2 is available in a variety of sizes ranging from 13 inches to five inches in diameter. It is also available to fit stationary equipment such as generators. 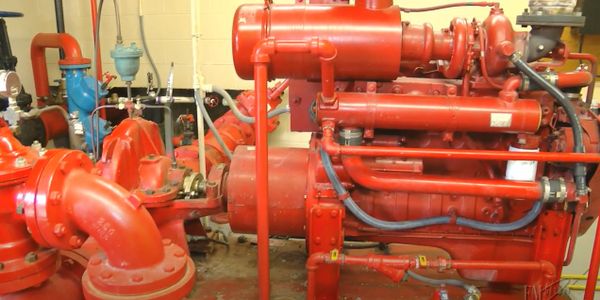