At approximately 4 a.m. on June 21, a release of vapor from an alkylation unit at the Philadelphia Energy Solutions (PES) refinery in Philadelphia resulted in fire and multiple explosions. During the emergency, an estimated 3,271 pounds of hydrogen fluoride escaped into the atmosphere. Given the extremely toxic nature of this compound, questions are being asked about its continued use.

Hydrogen fluoride is one of a series of ionic inorganic compounds formed by the union of a hydrogen atom and an atom of any of the halogens to produce a binary compound having the formula HXH, of course, H is hydrogen and X is any halogen.

Thus, we have HF (hydrogen fluoride); HCl (hydrogen chloride); HBr (hydrogen bromide); HI (hydrogen iodide) and so on down the 17th column of the Periodic Chart. In the presence of water these compounds break apart or ionize to produce hydrogen ions and halogen ions. The resulting aqueous solutions of HX are generally known as hydrohalic acids, specifically as hydrofluoric acid, hydrochloric acid, hydrobromic acid, hydroiodic acid, etc.

Hydrofluoric acid, being first in the series (Mol. weight 20), is the most reactive from the standpoint of corrosivity and it's used as an extremely powerful oxidizing agent. It is a hazardous material, no doubt about that.

Yet, its use continues and is increasing. To understand the reasons behind the decision not to ban this chemical we need to understand why and how it is utilized in the first place.

Around the turn of the 20th century, the automobile came chugging down the lane of history. In the beginning these vehicles were fueled by gasoline which, at the time, was a waste product derived from the manufacture of kerosene, the main source of illumination before the light bulb.

This "straight run" gasoline was like the industrial naphtha in today's marketplace. Because of its high volatility it was prone to explosion and considered too dangerous to be used in the wick-type lamps of the day.

However, those were the very properties that made it an ideal fuel for use in the spark-ignited internal combustion engine. This early gasoline was prone to "pre-ignition" or "pinging," especially when under heavy load. This reduced the power output of the engine and caused undue damage to the valves and their seats.

As the automobile became more sophisticated, the need for more power and better performance without significant increase in engine weight or size led to increases in the compression ratio. As compression ratios increased so did the tendency to "knock" when the straight run gasoline pre-ignited in the cylinders.

As gasoline overtook kerosene as the primary petroleum product, refiners sought ways to eliminate, or at least reduce, pre-ignition. In 1921, workers at General Motors laboratories introduced tetraethyl lead as an "anti-knock" additive. TEL, as this compound was known, worked well to eliminate "knocking." Its use in aviation fuel allowed octane ratings as high as 150.

Unfortunately, the combustion products that it produced caused a condition known to the medical world as "plumbism" or heavy metal poisoning, the effects of which are most detrimental when exposed to lead as a child. Consequently, the use of TEL as a motor fuel additive was banned in 1996.

With the demise of TEL, research was undertaken to produce a lead-free gasoline with an octane rating sufficient to meet the needs of modern engines. The way to accomplish this goal was found to be alkylation and reformation, processes that require an extremely powerful oxidizer.

Hydrogen fluoride meets this need and is in common use. There is another version of the process which utilizes concentrated sulfuric acid or oleum (H2O7S2), but this compound is about as dangerous as hydrogen fluoride and more of the material is required.

Also, hydrogen fluoride is usually regenerated and reused on site while oleum is commonly transported by tank truck over public roadways to a remote site where it is regenerated and prepared for re-use. The additional hazards presented by the increased quantity of material involved together with the need to transport it off-site may well tend to equalize the risks incurred with either process.

Certainly, in view of the obvious hazards involved, petroleum refiners would embrace any new process that would not require the use of such hazardous chemicals as oleum or hydrogen fluoride.

There is another process known as AlkyClean, developed by Lummus Technology, which appears to show promise in the search to reduce the hazards posed by the acid-catalyzed processes.

According to the company's literature: The "AlkyClean" process, developed by Lummus Technology, employs a true solid alkylation catalyst and offers a solution to the problems inherent in the use of strong oxidizing acids.

It employs a robust zeolite catalyst formulation coupled with a novel reactor processing scheme to yield a high-quality alkylate product. The true solid acid catalyst eliminates the use of corrosive liquid acid and is tolerant to feedstock impurities, changes in feedstock olefin composition, and process upsets (e.g., water spikes).

It also lowers maintenance and monitoring requirements. The total installed cost of the facility, including OSBL (regeneration facilities, safety installations, etc.), is lower than current liquid-acid processes, as the lack of corrosive acids in the system and the mild operating conditions allow for carbon steel construction.

Limited pre-treatment and no post-treatment result in fewer OSBL equipment pieces. If this process can be done at an affordable cost, it is expected that it will become more common as older acid plants are updated.

While the hazardous properties of HF are highly significant and cannot be ignored, it must be noted that this compound is used as a chemical intermediate, not as a "finished product." None of it is released into the environment during the normal course of activity.

Contrast this with the use of lead-free gasoline as opposed to TEL as an anti-knock agent. Every bit of the lead contained in a tank of "ethyl" gasoline ultimately was released into the environment. This amounted to several tons of lead and lead compounds annually.

Not so with HF or oleum. These compounds function as catalysts and are removed and recycled during the process. They do not appear in the product as utilized by the consumer.

Other Uses of HF

So far, we have only considered the use of HF in the manufacture of motor fuel. In fact, gasoline refining absorbs only about 40% of the HF produced. Where is the other 60%?

The biggest single use is the manufacture of refrigerants. Refrigeration is deeply ingrained in our society. Almost every home has at least one refrigerator and, particularly in the southern part of the country, an air conditioner. Nearly every public building is air-conditioned as well.

These systems utilize a freon as the refrigerant. Freon is a registered trademark of The Chemours Company, which uses it for several halocarbon products. The first of these used as a refrigerant were chlorofluorocarbons (CFCs), which performed very well indeed but have been linked to ozone depletion and therefore supplanted by HCFCs (such as chlorodifluoromethane).

Products such as Teflon and other similar non-stick coatings as well as plastics and specialized lubricants also contain fluorine and are produced by processes which utilize HF. Teflon or Polytetrafluoroethylene (PTFE) is a high-molecular-weight solid fluorocarbon consisting solely of carbon and fluorine atoms. However, none of them, as used by the public, contain free HF or elemental fluorine.

Do the benefits derived from the utilization of HF outweigh the risks inherent in the use of this compound? Given the 75% reduction of blood lead levels in Americans, particularly in young children, after the phase-out of leaded gasoline in the 1970s the answer would seem to be a resounding yes.

This is not to say that the hazards associated with hydrogen fluoride are not real. They certainly are but so are the benefits. Would we really want to return to the automobile performance of the 1920s and '30s? I think not.

Certainly, we would not want to see a 75% increase in blood lead levels. Would we want to forego our non-stick cookware or the specialized lubricants that can withstand high bearing temperatures? Would homeowners be willing to return to a refrigerator charged with sulfur dioxide (SO2), methyl chloride (CH2Cl) or ammonia (NH3)? That is what would happen if the use of HF was banned as some have suggested.

Certainly, oil refiners are aware of the potential liability attached to the use of hydrogen fluoride. If there was a less hazardous alternative that was commercially viable it is certain that they would embrace it to reduce their liability and the expenses incurred in the construction of facilities able to withstand the corrosive effects of HF.

Rupture of a 96-inch main providing water to 50% of the city forced closure of the courthouse until Monday.

IRECA's rope rescue competition in Houston helped this operator learn to do more with less.

Nearly 50 people were sickened by the carbon dioxide release on Saturday.

The ground gave way beneath the outriggers of the mobile crane.

Responders use the plant's own mobile crane to transfer the patient to the ground.

Another Crude Oil Train Goes off the Rails in Canada

Railroads have been operating under 30-day speed restrictions in the wake of Feb. 6 accident in Saskatchewan. 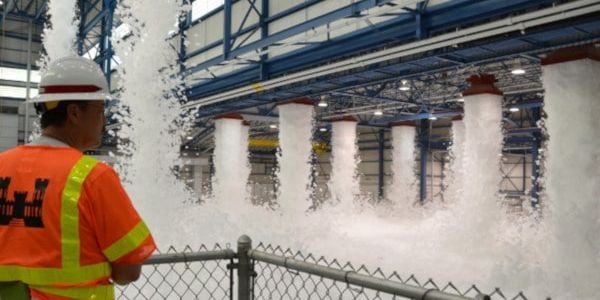 A deluge-type fire suppression system had been accidentally activated.