We all as foam users have a major dilemma in extinguishing flammable liquid (Class B) fires. A dilemma currently being demonstrated widely across USA with tightening State regulations around PFAS (Per- and PolyFluoroAlkyl Substances) based foams, usually sensibly banning their use for training and small uncontained municipal fires, but allowing their continued use for major flammable liquid fires to adequately protect life safety – with continued use of proven high purity C6 AFFFs. Some however have banned the use of AFFFs in critical applications prematurely, without many end-users’ knowledge.

Could an F3 transition be risking life safety and critical infrastructure?

Some prefer to risk expensive transitions into the unknown, by relying almost exclusively on Fluorine Free Foam (F3) alternatives. Are the potential liabilities, consequences and complexities fully appreciated in trying to achieve equivalency with such agents? Particularly when the evidence so far from major incidents and extensive comparative F3 testing suggests significantly higher application rates, slower extinguishment times, less flexibility and specific fuel vulnerabilities.  Little or no large scale F3 testing has yet been completed.

US Government Regulators have decreed under the 2020 National Defense Authorization Act (NDAA) that PFAS containing AFFFs (Aqueous Film Forming Foams) must be phased out by October 2024, while preventing DoD from purchasing PFAS based foams after October 2023 …seemingly no ifs, no buts. Exemptions to both restrictions only apply for shipboard use on ocean-going vessels. Doesn’t even seem to matter whether there is any equivalent reliable alternative in place for all other military applications, although there is an exceptional waiver for Secretary of Defense to extend these deadlines by up to 2 years, if adequate F3 capability is not achieved. Rightly, PFAS foams are prohibited from use for military training and prohibited from uncontrolled release at military installations except for emergency responses where containment may not be possible. Use for system testing is only permitted if complete containment, capture and proper disposal is provided to prevent discharges to the environment.

Yet that same NDAA 2020 Executive Summary confirms “The world is more unstable and dangerous than it has been in recent memory. … Our Congressional duty to provide for the security of our nation, protect our values, and support those who defend them is all the more important as the tide of war has risen rather than receded. We must pivot to meet the needs of a nation increasingly at risk.” This seems a contradiction by reinforcing the importance of life safety, necessary reliance on proven fast and effective firefighting capabilities in a time of increased need. So why force unnecessary changes into largely unproven F3 technology?

The National Defense Strategy Report also clearly warns “The nation has reached a pivotal moment …the choices we make today …will have profound and potentially lasting consequences for American security and influence”. Also strongly questioning the wisdom of any imminent F3 transition, particularly when those consequences are still largely untested and unknown under worst-case emergency ‘battle’ scenarios. Why such a short time-frame when major improvements have eluded current F3 technologies for over 20 years? Huge F3 investment efforts still fall far short of current 2020 US Military Specification MilF PRF 24385F(SH) Amendment 4 (Mil-Spec) requirements.  Other countries recognize this significant task and are discussing a 12year period of allowed use for many critical applications.

Are test approvals misleading us?

These 165 comparative fire tests under UL162 protocol confirmed “F3s did well against heptane but struggled against some of the scenarios conducted with IPA [Isopropyl Alcohol] and gasoline (both MILSPEC and E10 [gasoline with 10% Ethanol added]), especially when the foam was discharged with a lower foam quality/aspiration.” … “During the Type III [forceful application] tests, F3s required between 3 - 4 times the extinguishment density of the AR-AFFF for regular MILSPEC gasoline and between 6 - 7 times the density of AR-AFFF on E10 gasoline”.

Higher F3 expansions (7-8:1) delivered superior fire performance over lower expansions (3-4:1) which required 25-50% more F3 to achieve equivalent extinguishment. Higher expansion ratios usually mean reduced reach, placing firefighters closer to the flames. Much of the equipment and training in place today is based on lower expansion use of C6 AFFF & C6 AR-AFFF performance, with changeout a major issue that has not been adequately addressed. 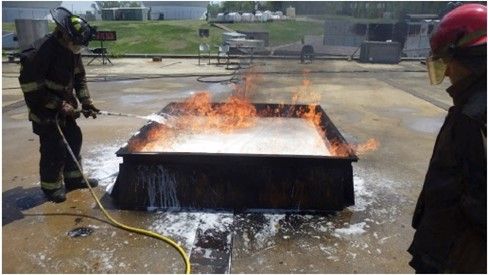 This NFPA study confirmed a likely inability to use F3s for existing fixed foam systems without major re-design and modifications. It may even require single source F3 products ‘locked-in’ to future designs which may prevent new improved F3 development upgrade use, without further modifications. Such issues along with viscosity and proportioning difficulties noted, plus higher aquatic toxicity, lower performance at high temperatures and corrosivity highlight those vulnerabilities of reliance on F3s for emergencies. Additionally most fire approvals use easier to pass heptane,  not the commonly used and stored gasoline or E10 (gasoline with 10% Ethanol added). These include UL162, FM5130, Lastfire, EN1568-3, ISO7203-1, and IMO marine approvals which may be misleading us.

Are US States rushing to judgements on historic contamination issues which have been addressed, without adequate listed and approved F3 solutions for widely used and stored gasoline, alcohol and E10 hazards? Have they considered the liabilities and consequences?

NRL highlighted aromatics as the cause

US Naval Research Laboratory (NRL) 2019 comparative fire testing Report also independently confirmed “... a divergence in extinction effectiveness of F3 formulations when the pool fire fuel is heptane vs gasoline.”  AFFFs are similarly effective on both heptane and gasoline …BUT F3s evidently are NOT. Requiring extinguishment of gasoline in 60 secs revealed four leading commercial F3s required between 2.5 times more and over 6 times more F3 than the benchmark C6AFFF. These differences widened as extinction speed became faster.  Speed is usually critical when protecting lives and minimising damage from fast-spreading fires like gasoline. Seconds count to save a life. Disturbing implications, with worrying concerns for public safety.

Further NRL work established the cause of these dramatically different results. It found F3 was attacked by 4 key aromatics in gasoline. The hardest to extinguish being TriMethylBenzene (TMB), then Xylene, Toluene and Benzene. Some F3s were more vulnerable than others, but all suffered significant adverse effects. These 4 aromatics are also found in Jet A/JetA1, but at lower quantities, which may also explain why F3s often struggle on aviation fuels.

Unlike C8s (defined by UN’s OECD as PFCAs with 7 or more perfluoroalkyl carbon atoms incl. PFOA, PFNA, or PFSAs with 6 or more perfluoroalkyl carbons in the chain incl. PFOS, PFHxS), short-chain C6 fluorotelomers are not proven to be harmful – but are proven fast, reliable and effective. A contrast to potentially severe and immediate adverse impacts with potential life loss, excess damage and attendant escalation risks from significantly less effective current F3s, as proven by extensive research. Consideration should also be given to the environmental harm from excessive smoke and firewater runoff created, potentially overflowing containment areas from choosing slower and less effective fire extinguishment for future major flammable liquid fires. …Quite a dilemma.  F3 formulations are quite different but are still chemical concentrates that should also be contained during and after use.

Tight management control of all discharges are essential for any chemical usage. Regulations are widely in place to ensure collection, containment, treatment and safe disposal of all C6 firefighting foams and have been for many years, specifically to prevent repeating historic legacy contamination. So why make US Military unable to use these alternative C6AFFFs carefully and effectively on major flammable fuel fires beyond 2024? … protecting lives and infrastructure when leading commercially available F3s still seem far from meeting Mil-Spec acceptability criteria?

The US Department of Defense (DoD) is investing greater than $10million to find strategic and validated solutions that solve these problems, but time is running out. It seeks alternative reliable effective fire performance through a Strategic Environmental Research and Development Program (SERDP). Environmental Security Technology Certification Program (ESTCP) focuses on PFAS remediation, executed in partnership with the US Environmental Protection Agency (EPA), and Department of Energy (DOE). Why shouldn’t careful C6AFFF use continue to be acceptable beyond 2024 with maximum run-off containment, collection, PFAS concentration and destruction?

Batelle confirmed more than 100 military aircraft crashed on US soil during the last decade, averaging around 10 per year. Assuming most were manned aircraft (not drones), that could be 10 pilots, maybe also passengers (depending on aircraft type) whose lives were at risk during ostensibly ‘safe’ operations on home soil. Are these lives now being placed under increased danger by the proposed exclusive use of F3 agents? 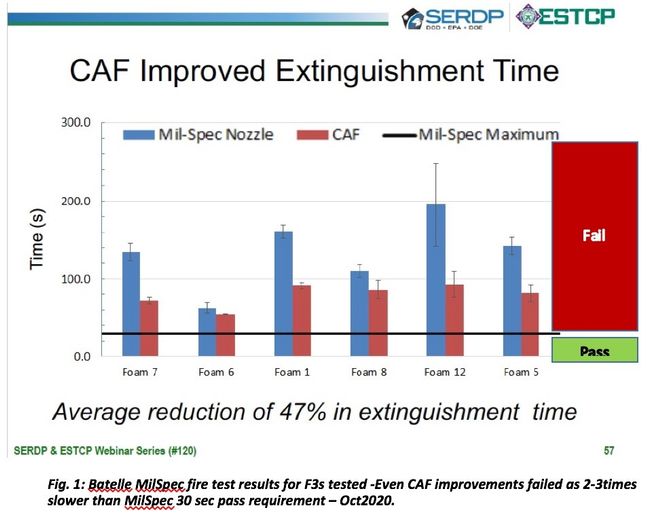 Four of the seven F3 results passed Mil-Spec burnback with the conventional nozzle (57%), increasing to six (85%) when CAF was used. However, burnback was only conducted using 2 gallons of foam onto 10 gallons unignited gasoline (MilSpec requires placing a burning pan into the foam blanket during testing), so perhaps it only indicates foam stability, not meaningful flashback resistance. 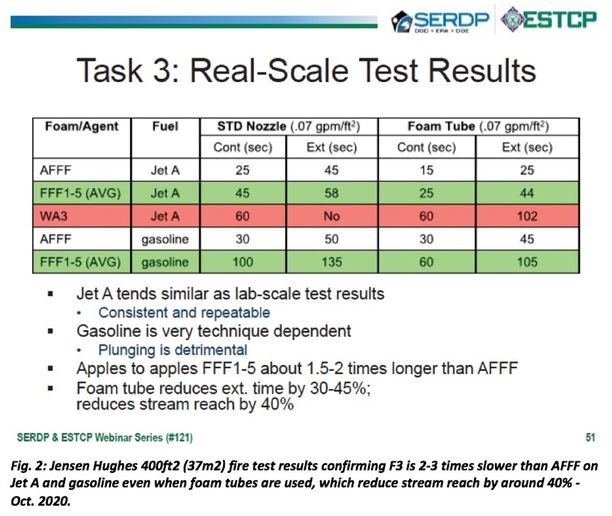