This article was inspired by an article concerning alternative uses of ground ladders for rescue in the Spring 2017 issue of Industrial Fire World magazine.

I read that article during the time period that I was conducting a training cycle, of several weeks, preparing several new FDNY Special Operations firefighters to attend their advanced firefighter (FF) rescue training. Several of the techniques taught in this course either involve the unconventional use of ladders or were inspired by techniques involving the unconventional use of ladders.

While normally used for access and egress, there are other more unconventional ways that they can be used to accomplish these goals. In FDNY manuals, there are techniques to use ladders to: bridge over alleyways (also used over excavations), to replace burnt-out stairs, and to bridge over fences (utilizing two ladders lashed together).

During operations at the World Trade Center ladders were laid out over the rubble in a back and forth manner similar to scissor stairs. This was used to slide stokes baskets containing search and rescue dogs to different locations.

Common uses of ladders are as highpoint anchors for various rope rescue systems.

An example of this is called the Denver Drill. This is one of the FF rescue techniques that we were going over with our members before they attend advanced FF rescue training.

In this technique, the ladder is leaned against the building above the window that the FF is to be removed from and a bite of line is passed in through the rungs to raise the FF out the window and then to lower him to the ground below. The technique of leaning a ladder over the window, either from the exterior (as in the Denver Drill) or the interior can be used to establish a highpoint anchor for various rescue systems.

Another technique is to use the ladder as a highpoint on the floor above by cantilevering the end of the ladder out the window (or off a flat roof). The Civil Defense manuals refer to this as a jib pole.

Other techniques to establish a highpoint for use when you don’t have a structure to ether lean or lay the ladder on for support is to use the ladder or ladders as a gin poles or shear legs (which are also known as an A-frame). Instead of leaning on something such as a structure these are held in place with guy lines. I was able to use an A-frame to move my gun safe into my basement by myself.

In many of these applications the ladder itself can also be used as a friction device for the rope to lower the victim. To accomplish this, the lowering line is wrapped around rungs in various ways or weaved between rungs to form a field expedient brake bar rack.

There are many ways that ladders can be used for hazard mitigation. They can be used as barricades to block off areas, or to cover hazardous areas such as holes and weakened floors. They can also be used to support potentially compromised overhead doors and as emergency shoring for walls, parapets, trenches, and excavations.  In the latter case they are often lashed or tied back using rope.

The ladder can have many direct applications towards the extrication of victims. These applications can range from fires to scuba diving.

The ladder can be used as a field expedient lever. This can be either a class I lever (think seesaw) to possibly lift a load such as a car off a victim; or a class II lever (think wheelbarrow), as described in Collapse of Burning Buildings, to be slid under a collapsed suspended ceiling and then lifted to create a void to search for and remove victims.

The class I lever can also be used to extricate a rescue diver and the victim from the water to safety back on the pier from which the diver deployed. In this case the ladder (lever) is hung from the pier (fulcrum) with pike poles and force is applied with a rope attached to the top end. When the ladder rotates to a horizontal position, hauling is continued as the ladder is slid onto the pier.

A similar technique to this is the ladder slide with a Stokes basket containing the victim lashed directly to either the middle or bottom of the ladder. In this case the ladder is leaning in the usual manner onto the area you wish to extricate the victim to. The ladder is manually hauled up until a sufficient amount is available to lever the ladder into a horizontal positon, and then the ladder with the Stokes attached is slid onto the area of evacuation.

Another more common use of the ladder in victim extrication is during an ice rescue to spread out the load of the rescuer and the victim.

Outside of its obvious uses on the fireground the ladder has many other firematic applications documented in FDNY’s portable ladders procedures. For forcible entry the ladder can be used to maintain a safe distance while forcing open something such as a door or a Lexan window. The tip of the ladder would be placed against the edge of the Lexan window while being held horizontally by several personnel who would than push until the window gave way.

A place to use this could be in a vestibule where you could be engulfed in flames during conventional forcible entry. Ladders can also be used to vent, when the extended ladder is dropped into position against a window breaking it. They can also be used as a base or support for various firefighting appliances, such as cellar pipes or distributors, to fight fires in cellars, cocklofts or under piers.

Finally to show its versatility for winter operations they advise that in heavy snow a ladder can be used as a sleigh to haul hose and other equipment to the scene of the fire where it can then be used in its more traditional role.

When I was first thinking of all the varied applications of ladders, that have little or nothing to do with its originally intended application, yet are utilized by emergency personnel; I also thought of all the other common tools utilized in the emergency service for which there are also ingenious applications. The intent of this column therefore goes beyond employing ground ladder in unique ways; it is to get you thinking outside the box.

Columnist's note: For my obligatory disclaimer, I offer that while I myself would not hesitate to utilize any of these techniques given the appropriate circumstances, many of them do not fall within the designed usage of the ladders and so the strength of the ladder in question should be taken into consideration.

James Kiesling is a captain with the Fire Department, City of New York's Special Operations Command. He holds as AOS in fire protection technology from Corning Community College, a BS in fire and emergency services from John Jay College of Criminal Justice and an MA in homeland security and defense from the Naval Postgraduate School. 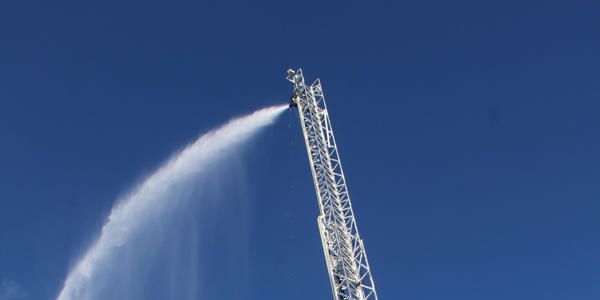